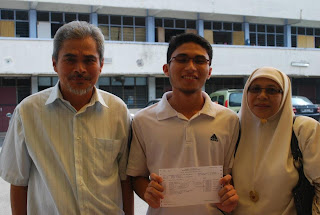 BRIEF INTRODUCTION OF MYSELF.

Born in a small family of seven and leads a simple life has really taught me, Muhammad Arieffahmi bin Abd Razak how significant it is to be a knowledgeable person in order to survive in this competitive world. On 21st of May 1993 at Hospital Besar Alor Star, I was born. My respected father, Abd Razak bin Shaari is a lecturer and my lovely mother, Siti Naraubiah binti Ahmad is housewife. Being the youngest of five siblings, I have always been taught to be independent and to love my sisters equally.

I received my formal primary education at Sekolah Rendah Islam Al-Amin, Bangi from 2000 until I sat for my UPSR in 2005. My UPSR result was excellent which was 5A’s. As for to the superb achievement, I was offered to continue my studies at Sekolah Menengah Islam Hira’, Selangor. I entered Maahad Tahfiz Al-Quran Hira’ in 2006 and started my secondary school life in this prestigious institution in 2007. In 2009, I sat for my PMR and successfully maintained flamboyant result in which I obtained 8A’s. Then, I was placed in a good Science-stream class in Form 4 and Form 5 before moving to Maahad At-Tarbiyyah Al-Islamiyyah (MATRI), Perlis in 2011. For my SPM, praise to Allah, I got a sparkling results of 10A’s and 1B for Arabic Language. Now, it is proven that my academic performances are consistent and always tip-top.

In addition for the splendid academic performance, I did well in extra-curricular affairs. In the field of sports and games, I was my sport house’s gold medal prospect in badminton and football. I contributed in Majlis Guru Besar Carnival and grabbed gold medal for volleyball championship. In the uniform bodies, I was the sarjan of the Malaysia School Youth Cadet Corps (KRS). I was one of the leader of platoon in my school and my highest achievement in this field was Best Sarjan in 2010.

However, my achievements in clubs and societies were far better. I was an outstanding Bahasa Malaysia debater and represented SMI Hira’ in various debate tournaments at international and national level such as International Students Debating Championship and UIA Interschool Debating Championship. Other than that, I participated in The Star-RHB State Level Mighty Minds Challenge 2009 and 2010 and also Public Speaking MAPPIS Championship and managed to get second place.

My role as a leader should not be underestimated. I was chosen as the Head Prefect in my primary school. In SMI Hira’, I cultivated my leadership skills when I became the President of Archery Club, Bureau Chief of Muazzin Club in Badan Dakwah and Rohani, Bureau Chief of Publicity for KRS, and AJK of Ekspo Dunia Islam. I was selected to hold these positions due to my high self-confidence, the ability to speak out my ideas in front of the people without fears and my skills in persuading others. Proven, although I was extremely busy in many aspects throughout the year, I was still capable of managing my schedule systematically and coped with stress excellently until I gained huge success all around.

As I grow up, I am greatly influenced with medical fields due to many reasons. So, I become interested to be a doctor and anything related to medical fields. I believe medical doctor is an instrument of God’s mercy.

Why do I set my heart to study medic so much? One of the reasons is because I love to learn Biology and Life Science very much. I am very interested to learn about living things, human bodies, the organs, the bones structure, the hormonal activities and also the body mechanisms. It makes me feel closer to the mighty Creator instead of just stunned by the miracles of our bodies. As for me, being a doctor is not only about giving exact treatments to the patients. It comprises the duties to educate people about the importance of maintaining good health and the significances of being free from any diseases. It is also a doctor’s responsibility to ensure that the societies realize about the dangers and risks of various diseases and illnesses thus providing helps to prevent those illnesses.

My greatest weakness is that I may easily sympathize when I look at those unlucky people who suffer chronic diseases no matter children, adolescents, or even the elders. I will feel a sudden yearn to help them in any ways so that they can enjoy their precious life as I am enjoying mine. As a caring and loving member of this big society, no one will care if I need to sacrifice my time,24 hours a day, 7 days a week when I can save the lives.

I wish and set a high hope that one day I will be able to enter the Jordan University of Science and Technology, Jordan. Since its establishment in 1986, JUST has been at the forefront of institutions of higher learning in the Arab world, it also maintains a high reputation and standard amongst the universities of the Middle East. JUST and the University of Jordan in Amman are considered to be the two premier institutions of higher education for engineering and medicine in the country,although numerous other faculties and specializations are represented as well. The university was described as the best scientific institution in the Kingdom by King Abdullah II.

To show how deep my interest is in this field, I have even sketched and imagined myself 15 years ahead. In the first 6 to 7 years hopefully starting from next year, I will undergo 3 months foundations in medical course before continuing my degree in medic. After that, I will receive my first class degree in medic, the MBBCh, which is awarded to medical graduates in Jordan’s universities.

As a fresh potential graduate, I will serve my country either with the government or any private medical centre in order to complete my fellowship and housemanship training. Then, I will do my Masters in medic, but this time I will specialized in cardiology to pursue my dream of being a cardiologist for another 2 or 3 years. Upon completion, I will become an expert doctor in cardiology or maybe cardiothoracic and serve at the National Heart Institute (IJN). I promised myself to be loyal to my beloved home country and to serve my people no matter how difficult it will be.

I am here ready to be recruited as the first Malay and Muslim doctor to become a respected cardiology expert not only in my country but also worldwide. Therefore, I would like to respond to the need of 1 doctor for 500 citizens by 2020 as stated by the government via Health Informatics Centre Planning and Development Division, Ministry of Health Malaysia. As the population grows and technologies evolve, the demand for medical expert will always there. By then, Dr. Muhammad Arieffahmi bin Abd Razak, will be there to ease the burden, insya-Allah.